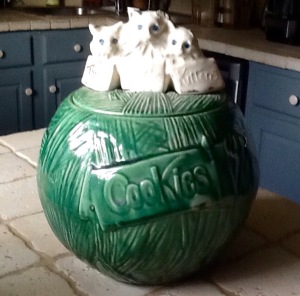 The round green object sat atop a pink counter that I was too short to reach. I eyed it, particularly the ceramic lid three white cats that shot up acting as its handle. It always held a reward, usually store brand chocolate chip cookies.

Although my mother was big on cooking, baking cookies was not her forte. She did bake – cakes, usually blackberry or red velvet, or the laborious stack cake, that no other stack cake in our small Mayberry-like town could touch. Despite all of this, homemade rolls were her culinary excellence. Butter wasn’t even necessary. To this day, a half a century later, I can still smell the rolls coming from the oven. They had her in them. The cookies, dull and lifeless, didn’t. The cookie jar did. Other than pink, green was one of her most favorite colors.

The words “Three Little Kittens” are now faded. Only a dab of red paint remains, at the beginning, “Three.” Only the ears of the first kitten remain intact. The others are chipped off. I imagine this worn and torn area of the cookie jar still holds the essence of my mom as she removed the lid with a smile and handed me a cookie for a drawing well done. I was always drawing.

The cookie jar was in a pile of stuff that my sister was throwing out. I asked, “Could I have that?”

Her words stung. I said nothing. Maybe she had no memories of the cookie jar.

(Note: This was synchronicity. I wrote this yesterday. But first, I emptied a box that had been in the closet for several years. I pulled out the cookie jar and started cleaning it up. Then I opened a writing course that I had recently signed up for and began my first lesson. The assignment was to write about an object from our past, one that evoked memories.I looked up this particular cookie jar up on line and found several images. It had McCoy Pottery written on the bottom. I found it was manufactured 1954-55. Yes, that was about write, as I was born in 1953.)