Once upon a time, there was this troubling spot right in the middle of our front lawn. It was a pesky patch of hill that just dropped off. It defied mowing. It was the sore spot of the lawn, like a giant pimple that wouldn’t go away. In my opinion it was troublesome for children, in that I felt it was dangerous.

One day I watched a little boy. Having a little girl, I wasn’t used to little boys. I had to keep telling him to quit jumping off “sore spot.” The whole situation was making me nervous. I told his father when he came to get him. He just laughed, saying he did much more dangerous stuff at home on his bicycle.

So, when my now husband came along, we dug up the rough patch of ground and planted a hillside garden. It was mostly clay, not that clay was a bad thing. I’ve heard that the Amish love clay gardens. Maybe I heard wrong.

But, we moved the garden later to another spot, another clay area. It did great there. Still, yet again, we moved it to richer soil. It didn’t do bad there, but there was not enough sun where we moved it. So, what do they say, the fourth time is a charm? We moved it again. We are in the process of building a greenhouse next to the garden, another continuing saga. Our projects are all continuing sagas.

Back to the eyesore patch of ground that was now a dug up piece of clay has been garden….well, we decided to put a pond there. I’ve lost track of all many years ago that was. If you scroll down my blog, you will see some pictures.

Last year, we finally thought we got it the way we wanted it, but we had dug beyond the clay, and there was a slow leak. So, this year, a complete overhaul was in order. We lined it. It took a mighty big liner. We’ve had to redo most of the rock work around it, and redo the waterfall.

Last night we worked until dark on the waterfall. The rocks are bigger than they look in the picture. I can’t believe my husband can lift them, but I’m thankful he can. Actually, some of the rocks on the pond were set in place by the tractor. I don’t know what the contraption is called that hooks on the back of the tractor, but there is a chain you can tie around rocks and carry them back. We make regular excursions into the woods for rocks. We have nearly rocked our entire house doing that.

There is obviously still more work to do on the pond. The black liner has to be covered. The walkway around the pond has to be finished. The things we’ve planted over the years are slowly blooming and should fill up the area behind the pond. We are working on just differing shades of green, easy and natural. We may add another waterfall between the grasses, which haven’t taken off this year yet. 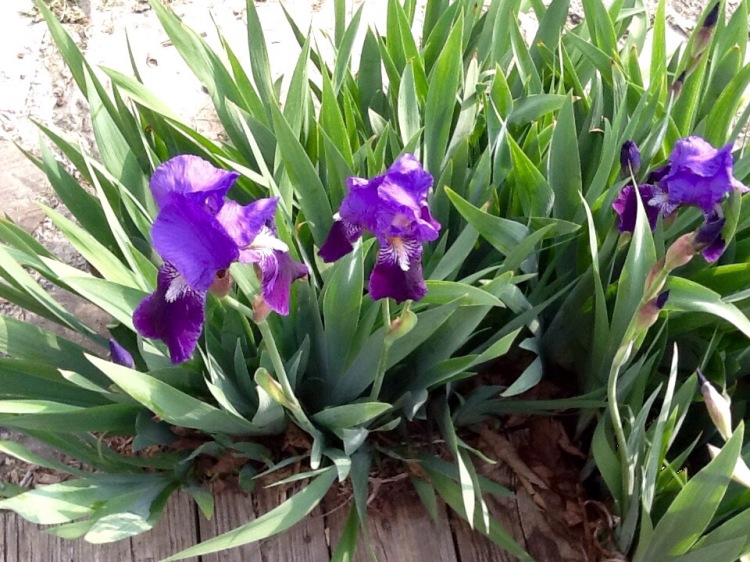 This morning I saw the iris’s in bloom, and said hello. They said hello back with a spurt of their fragrance. 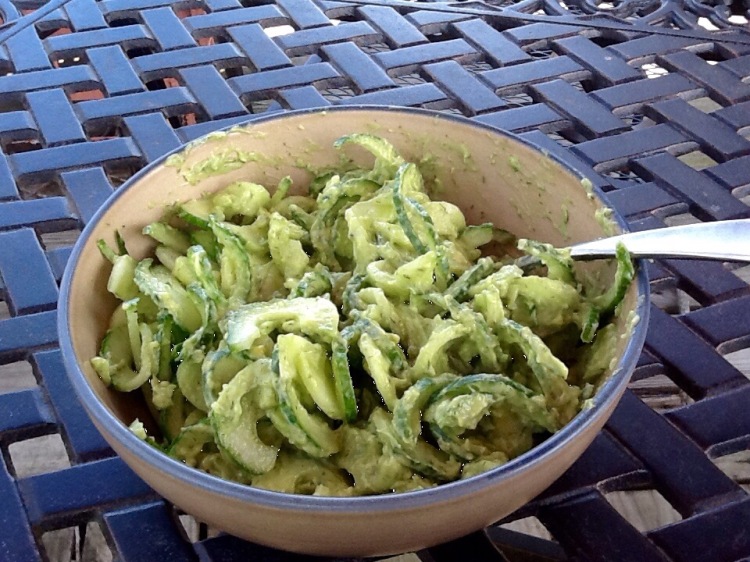 Yesterday, it was warm enough to have lunch on the deck. I had a spiralized English cucumber with a dressing consisting of an avocado, sea salt, pepper, lemon juice, dill, and garlic.

5 thoughts on “The Continuing Saga of the Pond”