Yesterday, I got a much-needed dose of spring tonic. I awoke with clogged sinuses. I didn’t feel well the preceding day. It had rained all day. The good thing is that the rain melted off the snow.

My husband encouraged me to use the neti pot. That along with several vitamin C tablets did the trick, or started to do the trick. I started to come out of my lethargy. I prepared split pea soup in the crock-pot. I went out into the woods. The woods were the final cure. The streams swelled. There are waterfalls where there were none before.

The only snow that was left was in a cave like area. I say cave like because we have never ventured in there to see if it is an actual cave. The opening gets smaller and smaller. Once we asked my father if there were any caves on the property. He said, “No.” We told him about the two openings we saw. He said, “Don’t go in there.” Well, that leads me to believe….

I started listening to an audio book, “A World Lost,” by Wendell Berry. I’m sorry to say this is the first time I’ve read his works, a shame, since he is a Kentucky author. His phrases are brilliant. I plan on devouring all of his works.

The weather was great. We got out the umbrella for our table and ate dinner on the deck – split pea soup, Caesar salad, and wine. We love eating on the deck. We could hear the roar of the stream from the deck.

We rolled back the netting on the fish pond and fed the fish. The netting had been place on it during the late fall to catch the falling leaves. I’m happy to say both the gold fish and koi came out of hibernation in good shape.

My husband also put the hammock back up. Yes!

I still had loads of energy. I made some banana bread, knitted, and worked on some art. A snow picture, of all things. Later I prepared some juice for next morning’s breakfast. I’m not used to having so much energy. My husband, on the other hand, seems to never stop.

All of this was a joy after the hard winter and the previous couple of weeks when we had experienced the dreaded three. I won’t go into them. They say things happen in threes. One, a leaky roof, did get fixed. The other two will be much easier to deal with in the spring weather.

Still, having energy, I stayed up late, painting on my iPad. I was going for a watercolor style. 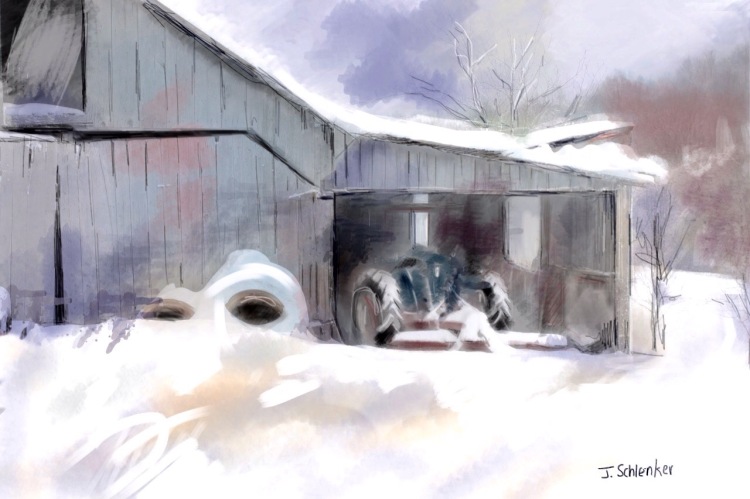 5 thoughts on “Spring is the Elixir”