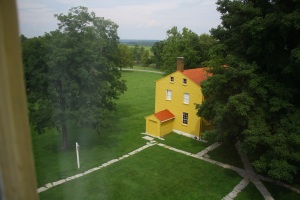 The village offers lodging in these same buildings and meals consisting of the fare that was once served in their dining halls. I have to comment that this is some of the best food that I have ever eaten, and they now have vegetarian choices on the menu. The tour of the village is self-guided. You will see craftsmen and craftswomen performing the same tasks that the Shakers once performed there. Some of these include broom making, weaving, spinning, sheep herding, oval box making, and hearth baking to name a few.

There are special events throughout the year as well as paddleboat excursions down the Kentucky River.

The United Society of Believers in the First and Second Appearance of Christ, or the Shakers, the name given to them by the outside world because of the dancing they did during their meetings, were a celibate religious sect, who followed the teachings of Mother Ann. Mother Ann, after having been in prison for disrupting a Sabbath, left England, bringing with her eight followers to the United States. She believed that carnal relations were the cause of most of the world’s troubles. Although she couldn’t even read or write, she started one of the largest and best know communal societies in this country. There were nineteen communities from Maine to Kentucky.