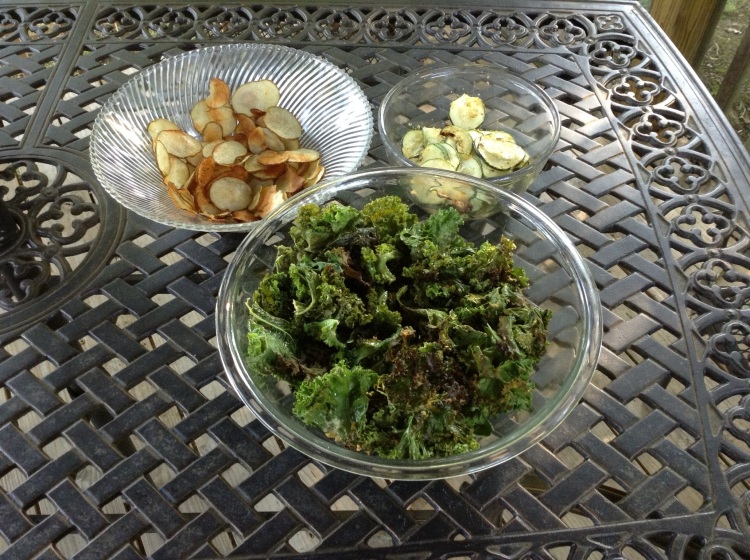 We were outside eating dinner and Chris said chips ahoy, thus the title.  I can fix some weird dinners.  Tonight it was Bocca chicken patties with a chutney sauce along with kale chips, zucchini chips, and potato chips inspired by http://theroadtoserendipity.wordpress.com/  In my opinion the ingredients for successful chips are parchment paper, sea salt, mixed pepper, a little olive oil, and nutritional yeast.  I did not use it on the potato chips as they were good alone, and that would have been overkill.

This year or at least this summer we are living a little more off the land.  The kale, zucchini, and potatoes came from our garden.  Our lunch of a salad consisted of lettuce and cucumbers from the garden, and the blackberry cobbler we had for dessert from yesterday’s post was made from blackberries picked on the farm.  We picked a new batch today.  That was going well until the tractor (we were also working on the trails as we went along) disturbed a yellow jacket nest.  I was stung only once luckily.  It still hurts.  Most fortunately Chris wasn’t stung at all.  He is highly allergic.  While out picking, though, a new idea for the farm came, “Blackberry Fields Forever.”

The peaches are small, but it is the first batch ever from our peach tree.  Earlier we had some blueberries from a very small bush that we have.  The birds kept getting the later yields.