Sometimes I write things and just leave them on my computer.  This was written sometime last year.

Do you ever lie in bed, somewhere between the world of sleep and the world of waking talking mentally to yourself?  You’re going over your recent day, making what you think are brilliant revelations in the mode of Mark Twain or Oscar Wilde.  Before you know it you’ve written a whole book while lying there between the sheets. If only you had pen and paper, but then you know any movement at all from the Yogi like dead man’s pose would result in all those wildly luminous tidbits of wisdom instantaneously vanishing as rapidly as they poured in from whatever unbeknown enlightened source from whence they came. So, you lie there perfectly still hoping the flood of transcendence doesn’t end. Later in the light of analysis it might have only been a sleep drunkenness spouting off nonsense. How can one ever truly know?

But, move you must from the bed you must. The morning routine follows. There are morning hygiene duties.  Then I move on to the kitchen setting out organic cereal and soymilk, a multiple array of vitamins and herbs.  I looked over the many bottles this morning thinking what have we become, but then counted our blessings that we haven’t yet moved onto the stage of pharmaceutical prescriptions, and knocked on the wooden table on which they sat that hopefully we won’t see that day. I pulled out celery, kale, cabbage, and carrots from the refrigerator and apples from the counter to stuff down the juicer, and then cleaned the juicer, putting the refuge into the compost, and stuffed the dishes into the dishwasher. It has been my experience that any laziness on my part with respect to the latter will bring out an army of ants. Then I would have to struggle with their possible demise, one of those moral dilemmas. My husband is to be admired in this respect, as he carefully catches any bees or spiders that might wander into the house between a card and glass jar and deposits them back outside, where the cat promptly destroys them if she can.  At least they have a fighting chance. 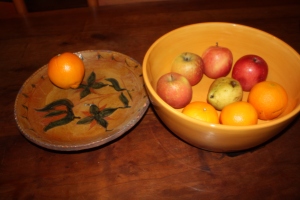 I had mentioned that the apples came from the counter. The apples along with various other fruits set in a bowl on the counter to give the illusion of healthy eating and add to the kitchen ambiance.  It’s just a fact of life – how you see it done in the glamorous houses and perfect “Leave It to Beaver” houses on television, where everyone is thin and never seems to touch any food at all.  Food is just a prop. I think, in reality most people’s fruit turns brown. I guess that could be a metaphor for life.

These good eating habits don’t necessarily follow throughout the day, but because we are aging baby boomers and have as of late in life developed certain moral concepts of eating organic and vegetarian, as well as the fact that our now age-spotted, sagging bodies are becoming increasingly intolerant to anything other than what is put forth in the Forks Over Knives movement, we try to eat more consciously something I regret not doing much sooner.  At least we start out that way in the morning.

We are always in the state of some type of do-it-yourself remodeling, also, possibly a 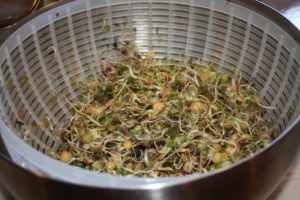 metaphor for life. My answer to cleaning is “remodeling.” The kitchen is one of those remodeling projects. Presently it inspires me to put forth healthier dishes. I feel rather proud that I’ve made my own sprouts; another bit of splendid bohemian ambiance to the newly tiled countertop. If we hadn’t purchased a new range, the pivotal point of the remodeling, perhaps we would have gone raw, but then my Yin/Yang imbalance and ayruveda type says I need cooked foods. Later trying not to obsess about health I make my trademark mid-morning chai latte, my comfort food, putting out of my mind dairy, my weakness. I’ve tried soymilk, almond milk, etc., in a chai, but

it takes away from the comfort that I derive from it. Somehow, that chai sitting beside my laptop is supposed to be the magic that will bring back to life all those brilliant words that poured forth while lying in bed.  For others it is coffee. But even the chai can’t bring them back to life. When I sit in front of the computer they come out differently. A whole new story comes out.  Our lives are ever changing stories, mostly made up ones in our minds.

Maybe you can put it down to senior moments that the words just don’t come. Last night we bit the bullet and joined AARP.  Although my husband recently turned fifty, I was long overdue. I will admit that previously I was too vain to do this before always throwing the unopened mail from them into the paper recycling. We recently went to concerts, Michael MacDonald and The Moody Blues.  Along with the stars, most of the audience was our age or older.  There was a jolt of reality to see the concert goers come in on walkers, some still donning long hair, now grey, that I remember so well from my hippie days in college. If only I had realized how much savings we could have had on hotel bills I wouldn’t have been so averse to joining.  We could have possibly had a free vacation by now with the savings.  Even though I shunned joining AARP for the longest time, I rushed to the grocery on senior citizen discount day. Organic food doesn’t come cheaply. I say I rushed at first.  I found it was better to wait later in the day to avoid parking lot hazards and in store walker and mobile scooter hazards.  I was reminded of an episode of “South Park.”  In recent years I do find myself wanting to eat dinner much earlier.  It’s more like a really late lunch to end the day with.  My husband isn’t quite with me on this one.

Perhaps it was the horrific thunder in the mid hours of the morning that caused me to jump half out of bed that brought such morning ponderings.  I asked my husband over breakfast if he had been afraid.  He said yes.  His accompanying grin said no.  Men don’t fear such things.  But, as humans we all fear some things, in my case I fear (pun intended) a great deal of things.  Being married teaches you what each other’s fears are.  That is probably the most intimate thing between couples, knowing each other’s fears.  I would define a successful marriage as one in which both you and your partner help each other deal with and overcome the fears.  He probably got the raw end of the deal.

It’s technically spring by the Gregorian calendar, although nature seems to be resistant to that fact. I love spring.  I fear cold weather. Hot flashes, I can’t comprehend, but chilling to the bone I can relate to even on what most would consider warm days. I think things were more natural on the 360-day cycle that might have been in ancient times. Weather is so erratic these days, especially in this year 2012. In do think life will go on normally or abnormally, whichever the case is. One day you feel the warmth on your sandaled feet, and the next day the sweaters and warm fuzzy socks you had so optimistically put away are called back into duty.  This along with the thunder and rain calls for more comfort food. I cleaned out the microwave, which we use for storage and found powdered sugar. Micro waved foods is also something we gave up in our pursuit of health. I haven’t yet decided whether to take it out in the remodeling process or leave it there as it provides perfect ant proof storage.  In response to this find and to my husband’s craving of something sweet, I boiled a small organic potato, mixed it with organic powdered sugar, rolled the doughy mixture out onto parchment paper and spread it with organic unsweetened peanut butter and rolled it up into what is called potato candy, something I remember helping my mom make in my youth. I refrigerated it overnight, as it is most perfect chilled.  I don’t delude myself in thinking that using organic ingredients constitutes this as being healthy.  The powdered sugar in my opinion destroys any concept of healthy.  Yet, I’m somewhat at peace with the fact that the food is not GMO, one of those many fears I mentioned earlier. I sent some off with my husband for his work snack.  I haven’t partaken as of yet, and don’t really plan to.  I made it for him as he prefers sweet.  In my later life I tend to crave salty.  I make sure it is sea salt to ease my conscious somewhat.

I guess we are like an older version of the couple on “Portandia.”  Take your pick from the many characters they play.  My son-in-law, upon seeing the program, said to my daughter, “That is so your mom.”  I have to say I felt at home the one time we visited Portland.

During the last few weeks we have been talking vacation.  What prompted this was when my father-in-law said something to us regarding our next vacation. This is a relatively new thing since we don’t really take “vacations” in the planned, forget about everything, and leave your stresses behind sort of way.  Vacations have always been paired with family obligation (not that visiting family is an obligation at all), work related, where we add on an extra couple of nights onto a business trip, or volunteer related, in which there is very little time for ourselves.  But the stresses are building, and being that it is 2012, it could be now or never.

It won’t be anything extravagant.  We simply can’t afford it.  I was tempted.  We got a reminder that we had a credit card we weren’t using which had a high enough limit on it to take a rather lengthy, posh vacation.  But with our luck the world would go on as normal after December 21st and we would be paying for this one wild spree for the rest of our days.  Flying is so expensive and disheartening anymore that we ruled that out.  Beginning and ending a vacation in an airport is definitely not a stress buster, but rather an oxymoron in all that can be regarded as pleasurable travel.  We opted for something drivable.

We are not into glitz at all.  Truthfully, the thought of a cruise or Las Vegas, anything where trees or dirt beneath our feet can’t be found, goes against both of our natures.  A vacation in nature is our nature.  We both agreed on the mountains.  Some of the most enjoyable times we’ve ever had were spent hiking.  On our first date we went hiking, and this vacation is planned not only as a get away, but also as a way to celebrate our tenth anniversary.

So, last in October of 2012, we visited Asheville, North Carolina, and then Raleigh to see our family, our grandchild – the high light of the trip. 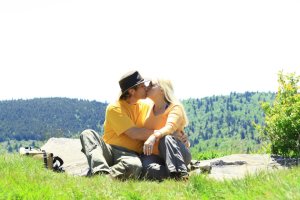 We live in nature, more or less a cabin out in the woods.  I think all the remodeling is to make it our perfect little retreat.