Several years’ back we watched a television show about pizza in New York.  Two of the places featured were Lombardi’s and Grimaldi’s.

Lombardi’s has been in business for over one hundred years beginning in Little Italy as a grocery store in 1897 and becoming licensed as the first pizzeria in America in 1905.  On our first trip together to New York City we visited Lombardi’s.  I remember a long line.  I vaguely remember the pizza.  I do remember the atmosphere, more like experiencing a piece of history.  I must note that the business was closed from 1984 to 1994.  When the doors reopened, they were reopened a block away from the original location.

So, on the last trip we tried Lombardi’s.  On this trip, we were staying in Brooklyn, and Grimaldi’s is suggested as the “must” visit there.  So, on our first night Grimaldi’s it was.  Grimaldi’s also traces its roots back to 1905.  The pizza at Grimaldi’s might have been a tad better than Lombardi’s, but still nothing to write home about, which is quite ironic considering I am writing about it.

There was the same long line manned by a colorful character in what I would call mafia attire.  After nearly an hour we were 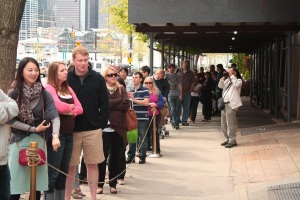 picked to go in – something akin to your lottery number being chosen.  There were no pleasantries given by this same doorman.  Tables covered in red-checkered clothes were lined up next to each other, no gap in between, in a cafeteria style.  Pictures of Frank Sinatra adorned almost one whole wall.

Once inside there was another long wait, perhaps thirty minutes for the pizza.  We both ordered root beers and drank them very slowly as we didn’t see any refills being given, and kind of concluded with them bringing out a glass with barely any ice along with bottles of root beers that any refills were extra.  I watched as empty plates were picked up and tables dusted off just a bit to make way for the next chosen entrants.

The couple next to us didn’t seem pleased at all and had some words with the waiter.  Almost immediately they received their pizza.   About the time they had finished our pizza had arrived and a new couple had had taken the previous couple’s place.  We were on the edge and not squeezed between people.

The crust had a unique taste from the coal oven.  The pizzas are simple with what you think of as normal pizza ingredients, nothing exotic in the least.  I tend to like the more gourmet take on pizzas myself, but then that wouldn’t be keeping with the experience of Grimaldi’s at all.  There were no leftovers.  Previously we had walked both ways the entire span of the Brooklyn Bridge and after the outside line wait and the inside wait we were pretty hungry.  After eating, we walked down the street to the East River.

I will conclude by being thankful for having both a historical and present New York landmark experience and sharing it with my husband.  In the following days of our trip we followed our gut on choosing restaurants and the food experience got much better.

One thought on “Eats in New York – Pizza – A Tradition”