Intuition and synchronicity came into play this morning, as it does so often, in determining what the “J” word would be.   I picked up the book I am currently reading.  In today’s chapter the word jigsaw was used.  A few minutes later I played a word scramble game where you have to make as many words as you can from the six letters given you.  At least one word will always be six letters and solving that word within the two minute time period will allow you to go onto the next level.  The six-letter word was jigsaw.

Prior to today this word has also been making an appearance.  We have been building a rock wall or façade for a building for the past couple of weeks.  As I have been placing the rocks I was likening the process to completing a jigsaw puzzle.  Sometimes all the pieces fall into place so easily and on other days it can be so hard.  Placing the rocks also bring in the element of balance.  There have been a few times when I didn’t have the balance right and what I had so hastily placed without a firm foundation came tumbling down. 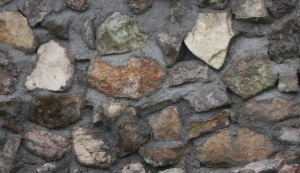 This can certainly be a metaphor for life.  All the experiences, characters, and different chapters eventually come together like one giant jigsaw puzzle.  Sometimes the pieces don’t seem to fit, but in the end you see the total picture.

I’m at that stage in life where I’m beginning to get faint glimpses of a picture that might be.  I’m thankful for those days when the pieces fit.

14 thoughts on “Life as a Jigsaw Puzzle”