Take in hand, Bowl of Clay, formed from the earth 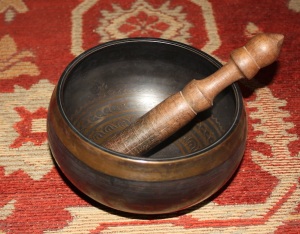 Into and don’t let disperse

Swirl around with wood from forest tree

By hand of wind formed from air

To be engulfed by its ashes

Absorbed into the ether

In the emptiness of the bowl

And melt into the healing vibration of om

In a writing group I’m in we were given a writing assignment of pouring ourselves into a bowl that is our world.  Thoughts about this assignment, as with all ideas, come in pieces to me.  This particular one came about through a succession of synchronicity.

This morning while doing yoga I was listening to Explore Your Spirit With Kala, and thinking at the same time about the bowl assignment.  The guest, Eldon Taylor, began to discuss ego.  I thought about throwing ego into my bowl, and began thinking about something I had heard Wayne Dyer say, that ego means to edge God out.  I thought I must use that.  A minute later the guest used the same phrase, to which I couldn’t help by shouting out, “Whoa,” thinking, an added synchronicity.

Doing upward facing dog, I looked up to see a bowl we had bought at a mall months earlier (pictured).  This is my singing bowl, made from various alloys, the other element, metal, also coming from the earth. I wasn’t really interested in shopping that day, but I remember telling my husband how thankful we stumbled upon the Tibetan singing bowl that day.  Brightly woven cloth from llamas drew me into the kiosk, but discovering the lone bowl was the prize.

As I began the writing process, I was spurred along by the wind outside, another element – air.  And, that’s how it came to pass.

20 thoughts on “Recipe For Success of the Spiritual Kind”