I am thankful for the invention of the games Scrabble and Words with Friends.  I’m a Scrabble player from way back.  So naturally when a similar version, Words with Friends, was offered as an app for Iphone I jumped on it.  Also, the cell phone would probably get quite dusty if that particular app wasn’t on there.

Even though I blog and write, my vocabulary isn’t the biggest.  Spell check, dictionary, and thesaurus on Word are my biggest buddies.  But with Scrabble and Words with Friends I do believe it’s more about strategy and tile placement than a huge vocabulary.  I did make a vow to myself that I would look up words played by both others and myself as a way to better myself.  Sometimes I’m quite surprised when words do go through.  After several attempts at being told, “sorry, that isn’t a word,” something unexpectedly goes through and I’m saying, “No, wait, wait, I didn’t really want to use that word.”  I think there should be some kind of built in warning that says this word will give you ____ points, is this your final word?  Then again, at least you get several chances, something you never got in the original board game of Scrabble.  You held your hand on the last tile while you were laying it down, while also looking into your opponent’s eyes. 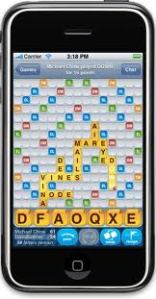 As I said, my vocabulary is lacking.  I’m quite amazed at people who speak several languages.  Most have a far better grasp on the use of the English language, even though it is not their main language, than I do, and it is my only language.

Back in college I was playing Scrabble with my boyfriend and his father.  I put down the word “yo” which was quickly challenged.  Even as I write it in Word, it is underlined in red to indicate I’ve misspelled.  I defended my use of the word by saying, “You know, “Yo, ho, ho, and a bottle of rum.”  I just as quickly had to take it off the board, as they didn’t buy it.  Nor, did the dictionary at the time.

I’m amazed at the words Words with Friends will take.  Even though I may be able to use a word that seems more dignified, brilliant, and fitting to some form of intelligence I usually succumb for what will give me points such as the over used words, qat, za, xi, xu, taj, suq, etc.  Properly placed they can give one an advantageous lead.  Still, I never quite remember their meanings, and I would never use them in a sentence, other than the one I just did.

There was a time I was ruthless in Scrabble.  I was actually ruthless at most games.  My competitive nature must have shown through, as once I volunteered to help pick up garbage on the side of the road.  The person in charge took me aside to say, “This is not a competition to see who can pick up the most garbage.”  To give himself an advantage, but mostly to see me woozy, my husband would often fix margaritas when we played.  My consumption was his only way of winning, even though he is much smarter and well rounded than me.  My ruthlessness in the game has died down, as well as the dream I had decades ago to collect enough scrabble tiles to tile a rec room floor.  Now, the wheels are turning.  What if a group of students, English, or creative writing, used Scrabble tiles to tile a classroom floor?  I see great possibilities for a unique learning experience.  I’m all about experience as the major tool for learning.  A couple of years ago, I also had the idea of reconstructing a full size “Lincoln’s Birthplace,” out of toy Lincoln Logs.  That particular idea didn’t quite pan out.  We did, however, end up doing a replica with real logs.  I will touch on that on Lincoln’s birthday.

Sometimes I think playing word games such as Words with Friends is a waste of time.  But, I’m encouraged on with scientific evidence that such games work to stave off dementia, strengthen critical thinking skills, and promote brain health.  At my age I need all the help I can get.

5 thoughts on “It’s Only a Word Game”