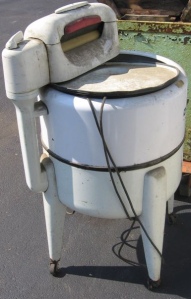 Before modern times there was always a day sit aside for laundry.  I almost feel guilty now to even say I’m doing laundry.  There is not really much to it.  You separate colors and load into a machine that does everything for you.  Likewise, the drying process is even easier.  In fact my laundry is being done for me in the machine as I write this. The only real chore is folding, hanging and putting away the clothes.  Ironing, well, in this household we iron as we go.  Or, in some cases we just throw the item back into the machine to de-wrinkle for us.  But in olden days laundry was different, a tedious chore, that a whole day was sit aside for.

I have always lived more primitively than most.  For twenty-five years we only had cistern water derived from rainfall and heat in the winter from two wood burning stoves.  So, I can relate just an inkling as to how Sally must have lived; but only an inkling.  Still with a cistern, we had indoor plumbing.

You might be wondering who Sally is.  Sally is a lady I met when I was just a child of 8.  She was 103 years old when I met her.  She was born into slavery in 1858 and died at 110 in 1969.  I began studying and writing about her approximately four years ago.  To see her picture go to:  https://athursdayschild.wordpress.com/2010/12/21/introduction-to-sally/

When we first moved here in the late 1970’s – to the farm, there was a pump house next to the house.  This small house basically served as the enclosure to house the pump that pumped the water inside from the cistern that the pump house was built over. This also served as the laundry room. There was an old wringer washer there, which looked rather complicated to me.  Just in back of the pump house were two steel poles in the shapes of ‘T’s with wire strung across.  I grew up watching my mother hang out clothes on those nice sunny days even though she had a dryer.  They always smelled so fresh.  Who can’t remember the freshness of their own mother’s laundry?  Now, we add chemicals for the illusion of freshness.

Well, needless to say I didn’t go for the idea of a wringer washer or hanging out clothes.  I don’t even own a clothespin.  Plus, the idea of leaving a warm cozy, wood-burning fire heated house, in the dead of winter, to go to another building to do laundry just wasn’t appealing at all.  It was enough to step outside for wood to add to the fire.  Even though I dislike the idea of handling wet laundry in freezing temperatures, I dread even more the thought of what might crawl into the pump house on a steamy summer day.  So, I went the more modern route in spite of my own mother’s warnings that we wouldn’t have enough water to operate an automatic washer.  Taking into account the amount of rainfall and checking the water level every couple of days in the cistern we always got by.  In times of drought I always showed up on my mother’s doorstep with my laundry.

Sally’s life was a little more complicated, although I doubt she saw it that way.  After all you don’t really miss conveniences unless you have experienced them.  I was told she always did her laundry on the back porch in Lewis County.  She used the old wringer washer and hung out clothes in the back yard, which caught the breeze of the Ohio River that just lay just across the field.  There was an art to using the old fashioned washers.  A certain amount of strength was involved as well as skill and timing so as not to get fingers caught in the wringer apparatus.  Everything about them was manual.  There were two tubs, one for washing and one for rinsing.  Water has to be heated and hand fed into the tubs or ran from an outside spigot through a hose.  Soap shavings, made using a bar of soap and knife, were sprinkled and mixed into one tub to make the cleaning suds.  Clothes were fed through the wringers, resembling two large rolling pins, to remove excess water.

The washers first appeared in the early 1900’s and evolved over time. The first ones were hand-cranked apparatuses with a flywheel to aid in the agitation of the clothes.  By the 1920’s electric ones were available. Out in the country, a gasoline motor did the work. This is how Sally did laundry for nearly fifty years.

Laundry day in the summer just wasn’t for clothes.  While Sally labored on the back porch with clothes, in the 1930’s, 40’s and even early 50’s, neighborhood kids were bringing bars of soap and bathing in the creek on the other side of Sally’s house.  Afterwards, they were likely to end up at Sally’s watching and helping as she did her chores, while awaiting treats she had reserved for them.

This old-fashioned wringer washer was just disappearing from people’s homes to be replaced by the more modern versions in the 1960’s.  Old timers were reluctant to give them up.  In so many ways they were more efficient, using much less water as well as getting clothes cleaner.  Many people still had wells and cisterns for their water supply and had to be conservative.  Sally’s source of water was a cistern collecting rainwater.  Many modern amenities were just appearing towards the end of Sally’s life.

Something I had long forgotten came to mind while writing this…. something like a déjà vu experience.  John Hartford wrote and sang a song, “Good Old Electric Washing Machine — circa 1943.”  At one time, even though country music was not my genre, still this was one of my favorites.  It must have stuck with me for a reason – one of those synchronicities, that told of something to come, perhaps the writing of this piece.  I certainly never thought I might write about washing machines.  Is our life panned out in the minutest of details?  Such esoterical questions on laundry day!

The wringer washer she used in later years was high-tech considering her first days of doing laundry in Carter County.  In her earliest years she carried laundry to the creek.  There was endless hand wringing of laundry before hanging them to dry.  One elderly lady showed me the spot where her own mother used to do laundry.  This creek fed into the same creek just a few miles away where Sally would have first done laundry as well as bathed as a young girl in the 1860’s.  She would have merely used rocks at first beating clothes against them to remove dirt.  Then there was the invention of the wash board – a hand held wooden frame encasing a rippled piece of tin.  These are merely items of decoration now seen hanging on walls of some restaurants and in the homes of antique collectors.

Before moving to Lewis County Sally took people’s laundry in as a job.  One lady said she never met Sally, but remembers her elders talking about how Sally would carry the laundry on a basket over her head.  I asked if she got paid for this service.  The lady, said, “No, no, people didn’t have any money back then.  She probably traded for food or whatever she needed.”

Sally’s hard work didn’t really start winding down until she reached her late nineties.  Ted began to take over many household chores including the laundry and cooking.  Sally probably insisted on working as much as she could for as long as she could.  Hard work was a fact of her life and seemed to be automatic for her.  On the day I met her at one hundred and three she was mopping the floor.  So, she didn’t give in to idleness easily.

Other days weren’t so good.  An elderly man, now ninety-one relates how he visited Sally once when she elected to stay in bed.  He gave her a box of chocolate covered cherries.  She was pleased, and said, “Ah, thank you Coon.”
He said, “Her memory was fading.”  He laughed, “She called me Coon.  Coon was what they called my father.”

The bell on the dryer just rang.  My clothes are done.  I’m thankful for all the conveniences we have.