Right before Christmas my husband and I ordered snowshoes.  Internet research said this was a huge calorie burner.  During December we had a couple of deep snows.  We knew we would have to wait until after Christmas for their arrival.  In the meantime, we spent Christmas with my daughter and her husband in North Carolina.  We thought we would escape the snow there.  Not so.  To our surprise the day after Christmas we awoke to approximately eight inches of snow.  Meanwhile back in Kentucky the snow was melting.  We returned home a couple of days later.   We waited patiently, watching the snow melt away.  The snowshoes arrived.  The temperature got up to 60.

Now the snow is back.  Today I wanted to burn those extra calories, but it is oh so cold outside.  By mid-afternoon after much debate with myself I finally braved the twenty-five degrees.  After all, why did we order these?  Hopefully, not for the same reason we purchased the weight machine that takes up space in the corner of the room.   Another story.  So like Jeremiah Johnson I ventured out into the woods, hiking for an hour.  I’m thankful for my one small step out into the snow-covered forest, and one giant step into the exercise regime.

Here are some actual pictures of our snow-covered hiking trails. 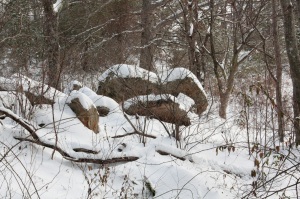