One of my indulgences (I won’t lie and say it’s my only one) during the day is a hot chai latte.  In warmer weather I take it outside on the deck along with a book.  And, in cold weather, curled up in front of the fire, it’s just more perfect.

I have been an avid hot tea drinker since childhood, starting out with sassafras.  Native Americans used sassafras as a blood purifier.  My mother boiling the roots, making it for me, was one of those cozy childhood memories. In my college days I discovered oolong at a Chinese restaurant.  Several decades later oolong is still my favorite.  I recently discovered a great tasting oolong – Prince of Peace.

There are some great benefits of oolong tea which include:  controlling fat metabolism in the body thus reducing obesity, removal of harmful free radicals, help with eczema, promotes good bone structure, may help with cancer and type 2 diabetes, and is a great stress buster.  Have you ever noticed in those stressful moments on soap operas everything stops to brew a cup of tea?  There are also zero calories in a cup of tea.

I discovered chai lattes quite by accident or coincidence or synchronicity, whatever term you wish to give it.  I was seeing someone off at the airport during the days when you could actually do that.  We had some time and ordered drinks from Starbucks.  I had ordered a regular tea but was given a chai latte by mistake.  I was hooked. 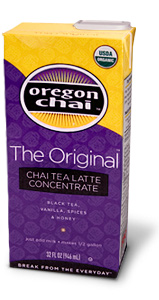 I started out using Oregon Chai at home.  You could make it with water, fewer calories.  It was sweet tasting.  But over time I turned lacto-vegetarian.  This cut out many desserts for me.  I was acquiring a lessened taste for sugar.  Starbucks eventually came to our area, and the Tazo brand grew on me.  It was less sweet tasting to me than Oregon Chai.

My husband and I also during the last few years have had the opportunity to make many Indian friends.  One friend in particular made a truly amazing cup of chai and gave me her recipe:

1. In a small pot, add water and grated ginger, sugar to taste.  Allow it to come to a boil. Add cardamom    powder, tealeaves and let it come to a rolling boil.

2. Add in milk and again allow it to come to a boil, stirring in between.

It’s the ingredients in chai that provide the benefits.  Cinnamon is helpful in diabetes and lowering blood pressure, as well as preventing cell damage.  Ginger has been used to treat upset stomach, diarrhea, arthritis, and heart disease.  Cardamom, like ginger also aids with digestion problems.  It has also been used for asthma and other respiratory problems.  Cloves, although, not in the above recipe is often used in chai.  Cloves have proven beneficial in toothaches and have shown antiseptic qualities and can be used to kill intestinal parasites, fungi, and bacteria.

While I can’t say chai really absolutely cures any illnesses, in my own humble opinion it can have at least a temporary uplifting effect on the blahs.  I’m thankful for tea time.

2 thoughts on “Comfort and Cure in Chai”