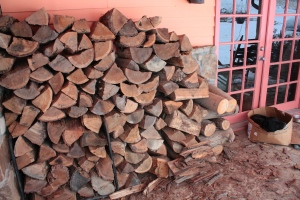 Today I’m thankful I stacked firewood.  It burned some calories.  More importantly I’m thankful we have it courtesy of a dear friend.

Over a couple of years ago while standing at the stove fixing breakfast, a pleasant natural whiff of something, not the eggs, lingered in the air momentarily. Suddenly I thought of my friend, Jewell. I looked up to see a bird sitting in the window right beside me. I thought this odd considering this is our cat’s window, and he habitually sits there every morning waiting for his own breakfast. I was immediately thinking of Jewell and feeling that she was visiting.

Jewell had departed the earth realm approximately a year prior. She was a neighbor, on one of the farms next to ours, in her early eighties, my dad’s age, and had always been my dad’s friend. We had always invited her to family gatherings; however, I didn’t really get to know her until about two years before her passing. I had been doing some genealogy work and started asking her things she remembered.

Jewell, even in her eighties, was very outdoorsy. I had been hiking and walking around our farm and the area for years. I could never find anyone to hike with me until Jewell. I’ll never forget one day, which was quite magical. She took me into old paths and showed me where people had lived and told what she knew of their lives. You could barely make out where the foundations had been with most of these places. Everyone always built his or her home as close to a spring as possible. We followed creeks, walked through their wet and dry beds, climbed steep hills, all those things you would think impossible for someone in their eighties, but Jewell was tough and gentle at the same time. When I remember her tears of blessings come to my eyes.

She had never gone to a doctor until the last few months of her life. She had sprayed insecticide to get rid of ants. It had gotten in her lungs. While nature was her friend, the unnaturalness of chemicals was her demise. She moved from Kentucky to Vancouver to spend her last days with her son. I called but she was unable to even talk at that point. But at one moment she told her son that I was her best friend.

Her son recently returned to Kentucky to check on Jewel’s farm. He took my husband into her barn, and gave us several years worth of stacked, seasoned wood. All year my husband has had every weekend tied up and had not been able to cut firewood. He kept saying I have got to get time to cut firewood. I knew Jewell was still showering us with her blessings.

Jewell was a blessing and maybe you will think of someone who has truly blessed your life.